First of all, this episode is amazing. It’s incredibly well-written, very compelling, and it stays true to the philosophical themes established in previous episodes. I talked about the theme of heroism in episodes 1 and 2 of Ping Pong the Animation, and luckily for me, my analysis has only been further validated by episode 3.

A condensed summary of what we learned in episodes 1 and 2 is as follows: Peco and Smile represent two opposing definitions of heroism.

END_OF_DOCUMENT_TOKEN_TO_BE_REPLACED

The first episode of Ping Pong deals with the consequences of naive idealism. The episode is probably best summarized with a quotation from Coach: “No man so good, yet another may be as good as he.” The episode is almost entirely centered around Peco as he transitions from being the all-star hero of the show to being exposed as an (apparently) talentless hack. Some contrasts in the narrative are exremely important to note:

1. When Peco dominates the rich boy from out of town, Peco is depicted as a charming hero. The rich boy is shown as ignorant and arrogant, clearly deserving of punishment. When Peco slaps the harshness of reality in the face of the rich boy without even breaking a sweat, he cries out “What were my ten years for?!” — an almost cartoonishly funny exclamation. As the audience, we have almost no sympathy for the rich boy.

2. However, when Peco is himself the victim of Wen’ge’s incredible Ping Pong skills, the narrative takes on a drastically different tone. We see Peco try to assess the situation, trying to calculate Wen’ge’s movements, and even though he loses the first few points, we are under the impression that Peco is just testing the waters; sure, he may lose a few, but the information he’s obtaining will let him triumph over Wen’ge, just as the hero always does, right? 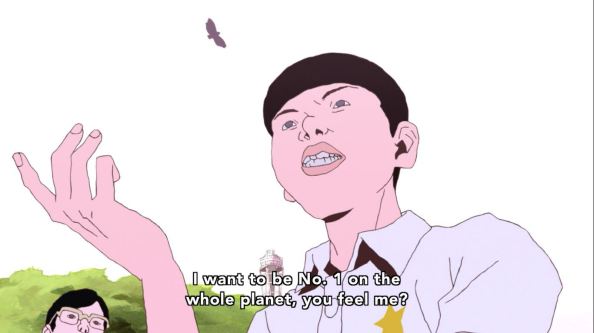 But no — when Peco attempts to serve a heroic “4,000 year ping pong special”, the ball slips out from underneath the paddle, hitting the wall behind him. It is at this point that both Peco — and we, the audience — realize that the game is utterly out of Peco’s control. No longer can Peco use “science” or “analysis” as a justification for losing points, as we now realize that the game was always in Wen’ge’s clutches to begin with. Wen’ge makes a statement that shocks us to the core: “Your backhand is weak! And your forehand! And your legs! And your reactions! Nothing about you is good enough!” — a statement which completely contrasts with the rosy perception of Peco we had at the beginning, as told by one of the ping pong captains: “Hoshino’s a strong player. He’s goot at footwork, backhand, blocks, everything.”

When Wen’ge skunks Peco, Peco performs a dramatic dive from the top of the screen to the bottom, obviously symbolic of the completely humiliating loss of his heroic status. Peco does not even realize that this is the same fate that he was callously delivering to overconfident rich boys all along. But even so we are led to have sympathy for Peco, because we had rested all of our hopes on his shoulders. Wen’ge is depicted as distinctly unheroic; cocky, cold, and cruel, and not nearly as charming as Peco, and the juxaposition of these two personalities is clearly intentional. With the loss of Peco’s hero-status, our naive expectations of Ping Pong heroism have been completely — and permanently — annihiliated. Ultimately, we learn that the charismatic, gets-what-he-wants hero doesn’t really exist.

The idea of heroism reappears in episode two, but with an interesting twist. When our faithful ping pong coach finally pushes Smile to his farthest limits, Smile finds himself pondering an old childhood memory. Sitting inside a closed locker, Smile waits for a hero to come rescue him, only to hear:

A robotic arm extends itself to Smile, offering within its hands an alternate solution to a no-show hero. In a cruel and uncaring world, Smile must actualize the results of heroism by himself, and he needs to take action in life, not simply wait unendingly for a hero that will never come.

Smile then presents us with an alternate definition of hero: not a likeable, charismatic personality, but a person capable of superhuman feats — someone who is unquestionably beyond human limitation. Smile imagines himself as a calculating robot, and in so doing, he channels an unbelievable strength and defeats the coach.

Ironically, Smile remembers a quote from his old self: “I want to be just like you, Peco.” Prior to his awakening, Smile had always compared himself to the ideal of classical heroism. But now, Smile realizes that the stoic, logical, and almost cruel “robot” within him is an equally valid definition of hero that opposes classical ideas in almost every sense. Smile therefore transforms himself from an anti-hero, a completely unsympathetic and abnormal character with few redeeming qualities, to a real hero.

(To be updated with the release of episode 3)

One thing that immediately struck me about the latest xkcd comic is how mind-numbingly funny it is. In an online world that is increasingly lacking in genuinely funny and original content, I applaud Randall Munroe for making the effort to craft such a cleverly written and highly innovative comic strip. The flow and meter of the stick figure’s words are so vivid and musical, and Randall marks the beginning of this intellectual and comedic adventure with such highly articulate words as: “The right to free speech means the government can’t arrest you for what you say.” Incredible! It’s a wonder that the Founding Fathers even thought it necessary to dedicate entire paragraphs to the concept of freedom of speech when our good friend Randall can do the job for them in only one short sentence.

Alright, I give up. Sarcasm really isn’t my thing, especially when I’m going to have to spend so much of my time unravelling this giant honking piece of shit. Honestly, it makes me wonder what kind of person who writes such good what-if columns and had some of the greatest early webcomic strips of all time can be so completely delusional now. Let’s get started.

This comic is just fundamentally contentless at its most basic level and performs absolutely no actual social work: the kinds of people who invoke freedom of speech as an actual defending argument are either 1) such literal plebeians that they wouldn’t be moved by a condescending and unapologetically preachy webcomic or 2) were never even trying to argue with you in the first place and just wanted you to fuck off because you were being annoying. There is no person in the world who would look at this comic and actually learn anything from it. Munroe’s comic is pretty much equivalent to going to a Wal-Mart and trying to teach the customers what free speech means: it’s so obviously pointless, undeniably useless, and completely masturbatory.

And even if this comic actually did answer some sort of real social problem, it’s stupidly blunt, completely unfunny, and not original in the slightest. There is a concept called “satire” that Munroe could have used to convey the lesson that he wanted us to learn, but I guess it was just beyond his capabilities. Instead, he decides to talk to us as if we’re all braindead children, and he makes it incredibly clear that this comic’s sole reason for existing is because poor Mr. Munroe had his little baby feelings hurt after losing an argument against someone.

I mean, really. Look at it! It’s just terrible. The majority of the comic is literally just a stick figure talking to you at various angles and poorly-done zoom in shots in order to add just enough “variety” that your eyeballs wouldn’t instantly implode upon seeing them. For the last panel, he even just draws a literal picture of a door because he thinks that will compensate for his complete lack of any meaningful illustration in the majority of the panels. I would figure that most reasonable artists would try to make up for the lack of illustration with some particularly poetic English constructions, but I guess Munroe decided that the 300,000 people watching him really love to hear his visceral and almost nonsensical musings expressed with both the vocabulary and wit of a 10-year-old schoolchild.

The worst part about this comic is that everybody agrees with it. It’s such blatant preaching to the choir, such an unimpeded pandering to some sort of Reddit self-superiority circlejerk of which I’m 100% certain exists. Munroe could have easily leveraged his audience to address an actual intellectual issue in public discourse, such as, for example, our tendency of overvaluing individual rights in a pluralist society to the detriment of moral development, or perhaps why “absolute freedom of speech” is impossible, or just ANYTHING INTERESTING, really! Not the shitty and completely boring habits of uneducated literal plebeians who don’t know the meaning of free speech.

I’d like to ask just one question before signing off: Why is it that engineers always insist on getting so heavily involved in public moral discourse when they really have no idea what they’re talking about? I’m an engineer too, but at least I acknowledge my limitations. I don’t think I’ve ever seen a philosophy major try to relay an armchair theory about the construction of bridges, or an English major try to demonstrate a faulty mathematical proof. But who knows? Munroe has always seemed to think that our society is becoming the chest-beating jock-dominated world of Idiocracy, but I think that the far more insidious problem is the growing group of middle class STEM-majoring pseudo-intellectuals who arrogantly think that they completely understand ethics, public policy, and morality. Fun fact: you need to actually take an ethics class before you can claim to understand it.

I know what you’re thinking. Man, come on, Madoka came out what — ten years ago? And during those ten years it’s been completely uncontested as the greatest anime of all time. I’ve loved this show and made it part of my LIFE. I own the Madoka figurines. I buy the Madoka posters. I wear the Madoka t-shirts. If you cut me open and looked into the bloody guts spilling out of me they would spell out the words M A D O K A MAGICA. Uh, in Japanese, of course. In all of my years I haven’t seen a single good objection to Madoka Magica — not even one! — so why is your random blog post going to be different?

Okay, guy, you might have a point. But hear me out: Madoka Magica is entertaining, sure, but it’s philosophically incoherent. It’s like eating spaghetti with ketchup instead of tomato sauce. It’s like adding vinegar to your morning breakfast cereal. There are so many bits and pieces of the show that would probably stand reasonably well as independent stories, but when combined, they become an inconsistent mismash of incompatible and mutually exclusive moral messages. Spoilers follow, but I’m assuming that if you’re at this point in the reading that you’ve either seen the show already or aren’t concerned if I spoil it for you.